Thrombosis are one of the leading causes of morbidity and mortality in the modern world. It considers that 70% of people in develop countries of west dies because of direct or indirect consequences of thrombosis. Overall annual incidence of venous thrombosis is more then 1: 1000 and frequency increases with years. Thrombosis divines in two basic group of illness: venous thromboembolism and arterial occlusive disease with atherosclerosis. It is estimated that annually that number of deaths caused by deep vein thrombosis in Europe is 543454 that is more then half of the total number of deaths from AIDS (5860) , carcinoma of breast (86831), prostate carcinoma(63636) and victims of traffic accidents( 53599).

Thrombosis is illness of blood clot ( thrombus) in veins or/and arteries, is due to the different mutal operation of acquired and genetic factors. Etiopathogenesis of thrombosis is define in 1856. Vein illness are the most massive illness of modern human. It is appears in all climates, in all populations and all age stages and it is more often in women. They can be acute ( deep vain thrombosis –DVT, superficial thromboembolitis- STF, pulmonary emboly-PE) or chronic vain insufficiency ( postthrombotic syndrome dermatoflebosclerosis, vein ulcer). It is assumed that 50% of all vein thrombosis is result of thrombophilia.

Diagnostic of thrombophilia is especially important in prevention and treatment of deep vein thrombosis. Patients with thrombophila need to be patiently followed during immobilization, medical, hirurgical and obstetrical interventions. They need to be protected by anticoagulant therapy or substitution( concentrate of antitrombin II (AT) or protein C(PC)) in all situation that increase risk is expected for vein thromboembolism (VTE).

In spite of developing and progress of medicine, up today still are not known and applicable value screening tests for thrombophily and for diagnostic of thromboemboly use so called thrombophyli ‘’panel ‘’. Thrombophylia, more then 90% of thrombotic episodes, clinically manifested as deep vein thrombosis(TDV) lover extremities, associated with pulmonary emboly or without it. Less then 5% thromboembolya are represented as thrombosis mesenteric or brain veins. The most common clinical manifestation of arterial thrombosis associated with ischemic heart disease, ischemic cerebrovascular insult and thrombosis of periphery arteries. In kids prothrombic event in 20-50% of cases are manifested as arterial ishemical brain insult(CVI) and 33-99% as sinoven thrombosis.

Thrombophlebitis of femoral part vein spahene magne (VSM-superficial vein system) can give an embolization of 10% hospitalized patients. Clinical finding is characterized. It is manifested by inflammation of the skin belt with surrounding erythema and edema, and ultrasound finding often shows proximal propagation thrombotic process.  Deep vein thrombosis(TDV) happends in Europe and USA about 50-160 people a year in population from 100000, while potential fatal pulmonary emboly (PE) develops in 0,86% of population.

Yearly, in USA about 275000 of new cases are registeted with vein thromboembolizm (VTE). Vein illnesses are most common in women then men, and that ratio is about 6:1 to 3:2 in different population. According to data of VPC (‘’vein consult program’’, conducted 2011, under the auspices of Internal Union of Phlebology) in the Serbia that ratio is 5:2 .

Intionaly acute deep vein thrombosis mostly develops in sinus soleal muscle. About 80% of patients, there is no propagation or embolization, but spontaneous recanalization lysis of thrombus, but in 5% flebothrombosis bellow knee still can lead to embolization.

Significantly rare (2%-10%) TDV is localized in other deep vain (upper extremities, cerebral sinuses, retinal, mesentery)(61,10). Thrombosis deep vein of arms rarely develops and mostly it is consequence of effort. Deep vain thrombosis (DTV) is manifested physical uncharacterized signs of stasis ( swelling, pain, heavy feeling and dorsal flexion of the foot (Homans sign) or by passive static load, but these signs are not specified for TDV. However TDV can be asimpthomatic-initionaly especially localized bellow knee(40-70%). Different diagnosis takes into account the presence of the other diseases (erzipel, inflammation, malignity, rupture of Becer cystis, heart malfunction, thrombosis aneurysm of popliteal artery etc). 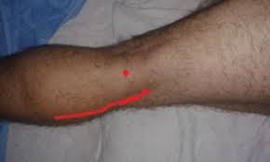 Cardiac edema( of the lower leg and foot) in heart failure With red colour is shown fluent of vain blood  in femoral vein commons, while the blue colour is shown the reserve flow through insufficiency sapheno-femoral mouth in v.saphena magna.

If colour Doppler ultrasound not give clear finding, we should seek for other diagnostic methods. D-dimer becomes useful  screening test of the first line, but only to exclusive TDV in patents with low or moderate risk. D-dimer is not specified for thrombosis, but negative findings don’t exclude existence of TDV. D-dimer represents marker of hipercoagulability in vivo, so we can expect increased values of D-dimer in all inflammatory process with extravessel  deposits of fibrin, DIC, malignity, sepsis, preeclampsy, during and right after surgery etc. NMR (venography) has high sensitivity and specificity, but it can be apply in few stages.

This site uses cookies used by Vizim Health Center and its partners for a variety of purposes, including personalized content, advertising to the interest of users, improving the user experience and measuring the use of the site. By clicking "Agree" you agree to the setting of these cookies.
Health Center 'Vizim' Cookie Policy

Any cookies that may not be particularly necessary for the website to function and is used specifically to collect user personal data via analytics, ads, other embedded contents are termed as non-necessary cookies. It is mandatory to procure user consent prior to running these cookies on your website.